No matter how many times you visit Bangkok, the city retains the capacity to surprise. There’s always something new to see or something different to experience in the Big Mango. Like many frequent visitors to Bangkok, I like to think I know my way around the city. I’ve enjoyed being able to show family and friends some of my favourite attractions, go-to street stalls and must-visit restaurants. But it’s always good to get local insights from Bangkok residents who were born and raised in the city. And it’s this expert local knowledge that you get on the Bangkok night lights tuk-tuk tour with Expique. 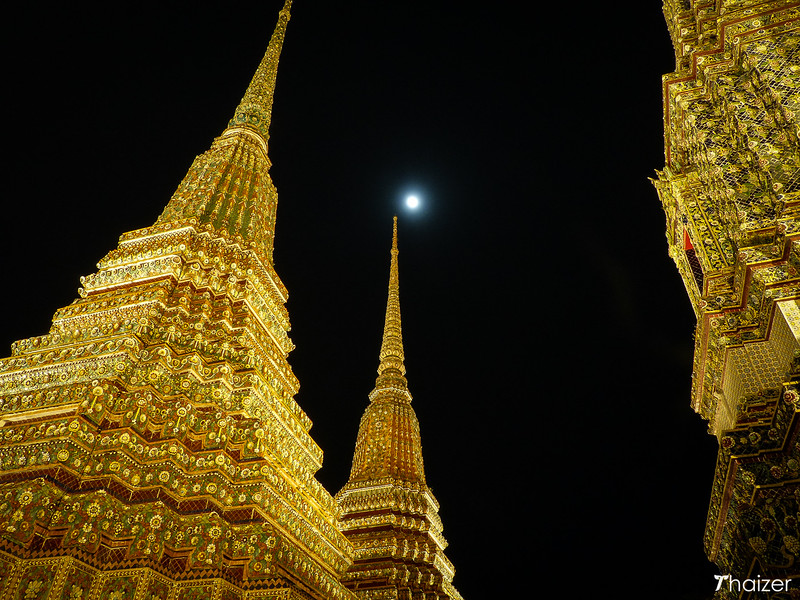 Bangkok tuk-tuk drivers
I’ve used tuk-tuks in other parts of Thailand many times over the years, but I can’t remember the last time I jumped in one of the noisy three-wheelers in Bangkok. With thousands of air-conditioned taxis, the efficient BTS Skytrain and the modern MRT metro, why use a tuk-tuk? But my recent night-time tuk-tuk tour with Expique reminded me that the iconic Bangkok tuk-tuks can also be a lot of fun. More importantly, it gave me an opportunity to speak to tuk-tuk drivers who are just trying to make an honest living. Not all tuk-tuk drivers in Bangkok are out to scam you. It’s a shame that the unscrupulous tuk-tuk drivers who hang around some of the main Bangkok tourist attractions have a less than stellar reputation which means that the decent drivers get wrongly tarred with the same brush. 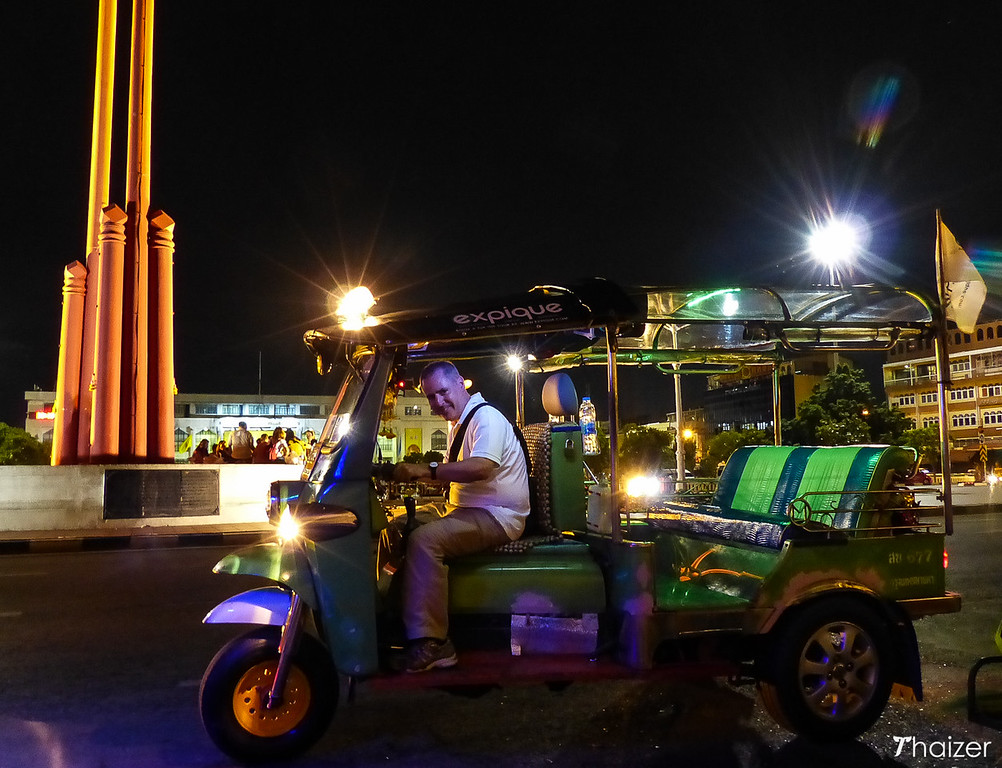 The Thai capital takes on a whole new dimension after dark with the sights, sounds and smells of Bangkok at night combining for a memorable experience. Routes may vary, but the Expique night lights tuk-tuk tour will take in a mix of locations including well-known tourist attractions together with a few off the beaten track destinations. You’ll also have the chance to sample food at local markets and at venues popular with Bangkok residents.

The Expique tuk-tuk night tour starts from the Thonburi side of the Chao Phraya River with the first stop at Klong San Market. In many ways this is a typical Thai market with vendors selling a range of goods from clothes to cosmetics. Klong San is very much a local market away from the main tourist trail so not the type of place you’ll see in the guide books. Although the market itself is nothing special, it’s the interaction with the vendors and your tour guide that makes it more fun. As always in Thailand, food is at the forefront and your guide will buy some regional specialities such as Isaan sausage and rice crackers for you to try. Your guide will also help you with some basic Thai phrases which you can try out on the market vendors.

From Klong San the tuk-tuks drove in convoy to Wat Prayurawongsawas, known locally as Wat Prayoon. The 200-year-old Buddhist temple is located in the Kadeejeen community on the banks of the Chao Phraya River. The area is home to one of the oldest riverside communities in Bangkok having originally been settled by people who migrated south from the old Siamese capital of Ayutthaya. Wat Prayoon has earned recognition from UNESCO Heritage for the restoration work carried out at the temple and on the prominent 60-metre high ivory-white pagoda, Phra Borommathat Maha Chedi.

Wat Suthat and the Giant Swing

Crossing over the Memorial Bridge the tuk-tuks whisked us to Wat Suthat and the Giant Swing where everybody also got the chance to pose for photos behind the wheel of the tuk-tuk. With our effervescent guide, Khun Ai, informing us about the full name of Bangkok and the history of the Brahmin swing ceremony we headed for our next food stop. 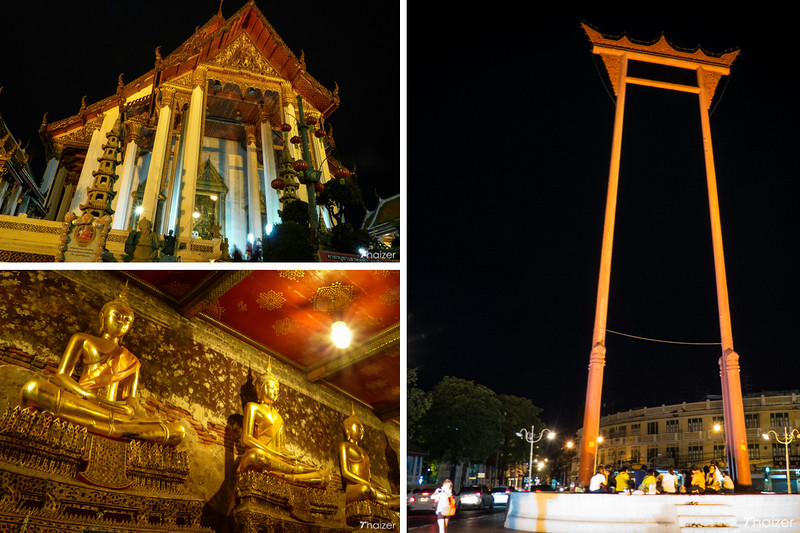 At the Giant Swing I noticed our guide was speaking to her colleague on the phone and asking about the queue at Thip Samai restaurant where our group were heading next. The popular restaurant doesn’t take advance reservations so you have to queue or get somebody else to stand in line for you to ensure you have a seat. Khun Ai was liaising closely with her colleague who was waiting in the queue. It was all perfectly coordinated so that when our group arrived by tuk-tuk we went straight through to the air-conditioned seating area with no waiting. Thip Samai restaurant is something of a Bangkok institution and I’ve read a number of times it’s supposed to serve the best Phat Thai in Bangkok. Unfortunately, the food didn’t live up to the hype. I felt the Phat Thai was far too sweet. Although you can add chillies and other condiments to adjust the taste to personal preference, I was underwhelmed by the food. That said, the place has been going for years and was packed to the rafters (mainly with Thai people) so Thip Samai must be doing something right and my opinion seems to go against the majority. As the saying goes, your mileage may vary so visit Thip Samai for yourself and let me know what you think. Either way, it’s certainly an impressive set-up and it was fun watching the chefs cooking on woks in the street and observing the dozens of staff whizzing around handling all the orders. 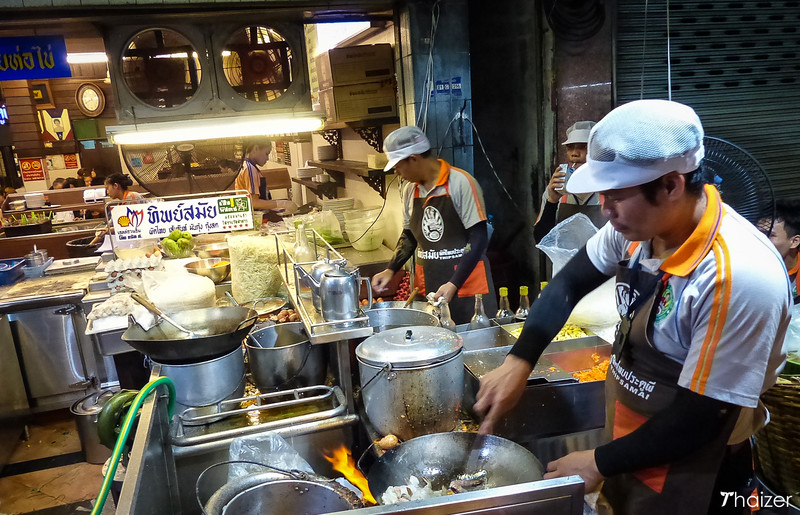 From Thip Samai the tuk-tuks drove north to Ratchadamnoen Avenue. Passing the Democracy Monument, Sanam Luang and the illuminated Grand Palace the next stop was Wat Pho. The building with the famous Reclining Buddha is closed at night, but visiting here in the quiet of the evening is a stark contrast to the daytime when it is thronged with tourists. The old temple takes on an entirely different atmosphere at night and walking serenely around the temple grounds we saw more cats amidst the stupas and chedis than we did people. 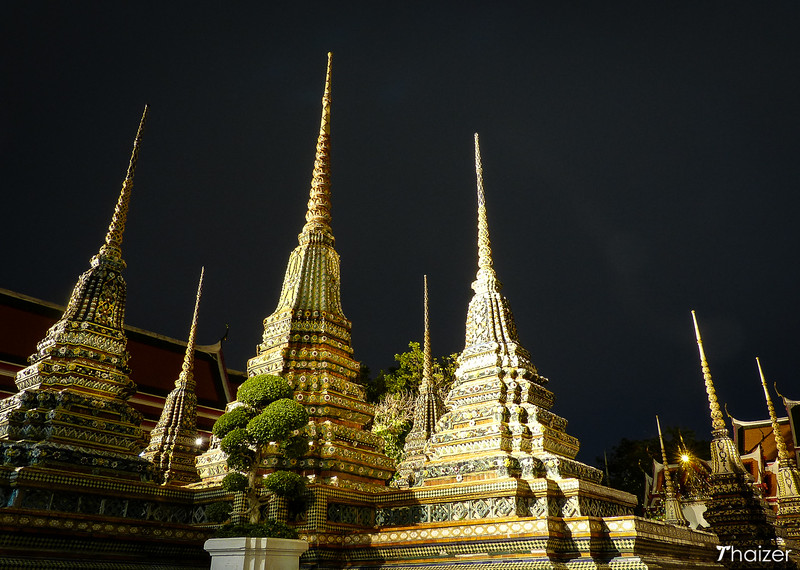 Further along Maha That Road brings you to the wonderful Pak Klong Talad Flower and Vegetable Market. The market is a hive of activity at night and fascinating to experience. Under the expert guidance from one of the flower vendors, everybody on the tour was given the opportunity to try their hand at folding lotus leaves. The tuk-tuks then took us to Chinatown where the tour was concluded in agreeable fashion with mango and sticky rice in a local restaurant. As a parting gift, our guide presented everybody with flower garlands which was a simple, but thoughtful gesture and appreciated by everybody. 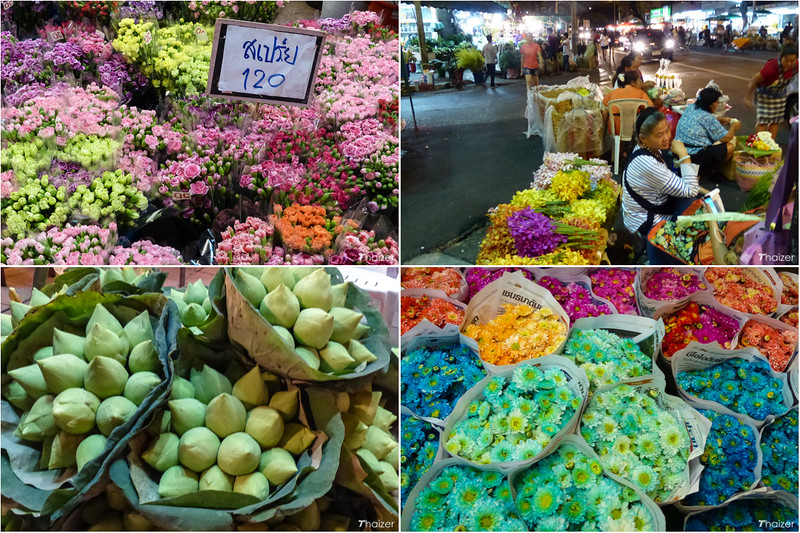 I’m not usually a fan of organised tours and because I prefer to do my own exploration, I wasn’t sure how much I would like this trip. I tried to approach the tuk-tuk tour with an open-mind and was pleasantly surprised by how much I did enjoy it. The Expique guide was knowledgable and bubbly and the tuk-tuk drivers were excellent too. Although I’d already been to most of the locations on the tour, I still learned a few new things about Bangkok from the guide and drivers and the entire evening was a genuinely sanuk experience. The route was well thought out, food and drink was included and at four hours long the tour never felt rushed with ample time at each stop.

The Expique night tuk-tuk tour is ideal for people who haven’t been to Bangkok before, but even for cynical Bangkok veterans like me the tour has much to offer and I can highly recommend it. It isn’t cheap at around 1,800 per person, but considering the length of the tour and what’s included it still represents very good value for money and made for an excellent evening’s entertainment.

The number of people on the Expique tuk-tuk tour is restricted to a maximum of ten with the starting point the BTS Skytrain station at Krung Thonburi. All the directions and the pre-tour information provided by Expique was clear and concise. The only thing I would add is to give yourself plenty of time to get to the meeting point at Krung Thonburi. The BTS Skytrain can get very crowded in the early evenings and trains can sometimes be delayed.

The tuk-tuk tour ends in Chinatown from where you have the option of catching a taxi-meter back to your accommodation or you can use your tuk-tuk to take you with a fixed price of 150 Baht to most destinations in central Bangkok. On my trip every single person opted to use the tuk-tuk which said a lot about how much people enjoyed the experience, the fun attitude of the drivers and the guide. Taking the tuk-tuk home was more expensive than a taxi, but it’s a nice way of saying thank you to the driver who gets to keep the fare as a tip.

Socialgiver: giving back to local communities
I was invited on the Bangkok tuk-tuk tour by a Thai company called Socialgiver. They are an award-winning social enterprise that fundraises for charitable causes by selling gift-cards and services pledged by hotels, restaurants and tour companies in Thailand. Businesses such as Expique offer their services on Socialgiver.com as part of a CSR (Corporate Social Responsibility) initiative to raise funds for local projects. Along with competitive prices, every Baht you spend with Socialgiver goes towards good causes. For example, booking the Bangkok night lights tuk-tuk tour via Socialgiver means that 100% of the profit from the purchase goes to the Zy Movement Foundation which helps children with movement disabilities.
Find out more about Socialgiver »

Disclaimer:
I was a guest of Socialgiver for this tour, but views expressed here are my own.