Thailand is justifiably famous for its food. More accurately, Thailand is renowned for its savoury and spicy food. Some visitors take to the food immediately whilst others take a bit longer to adapt. However, there is one food that seems to be universally popular with overseas tourists coming to Thailand; the roti (which may also be written as ‘rotee‘). 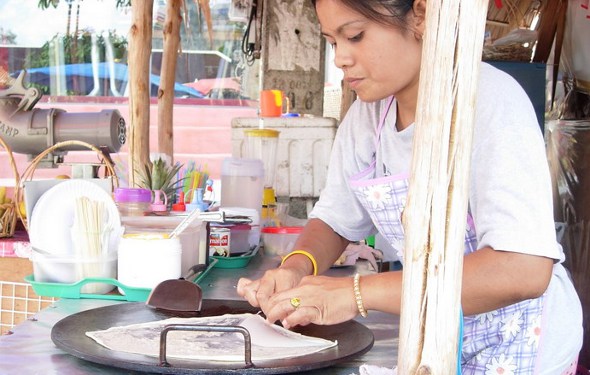 Introduced by Indian immigrants to Thailand many years ago, the roti is usually eaten as a desert or snack and comes with a choice of a number of different fillings. More often than not, the roti vendor is of Muslim or Indian origin having had the techniques passed down over the generations. Roti carts and stalls can be found in all parts of Thailand from Bangkok to Chiang Mai to Phuket, but are particularly common in the southern provinces where there is a larger Muslim population.

Roti vendors usually set up stall in the evening by the side of the road alongside other food vendors, but on the islands and beach resorts they can often be found during the daytime too. Making the roti is something of an art and is intriguing to watch as the pastry is rolled, spread and gently fried before adding whatever filling the customer chooses. The pancake is then topped with condensed milk and sugar. Depending on your choice of filling, the roti is then either rolled into a piece of white paper or sliced into little squares and placed inside a carton. My personal favourite is the banana roti, but you can have them plain, with peanut butter, with chocolate, with mango or various other fillings. Absolutely delicious and with a typical price from around 20 Baht per roti, it’s a cheap and easy way for those with a sweet tooth to get their sugar fix.